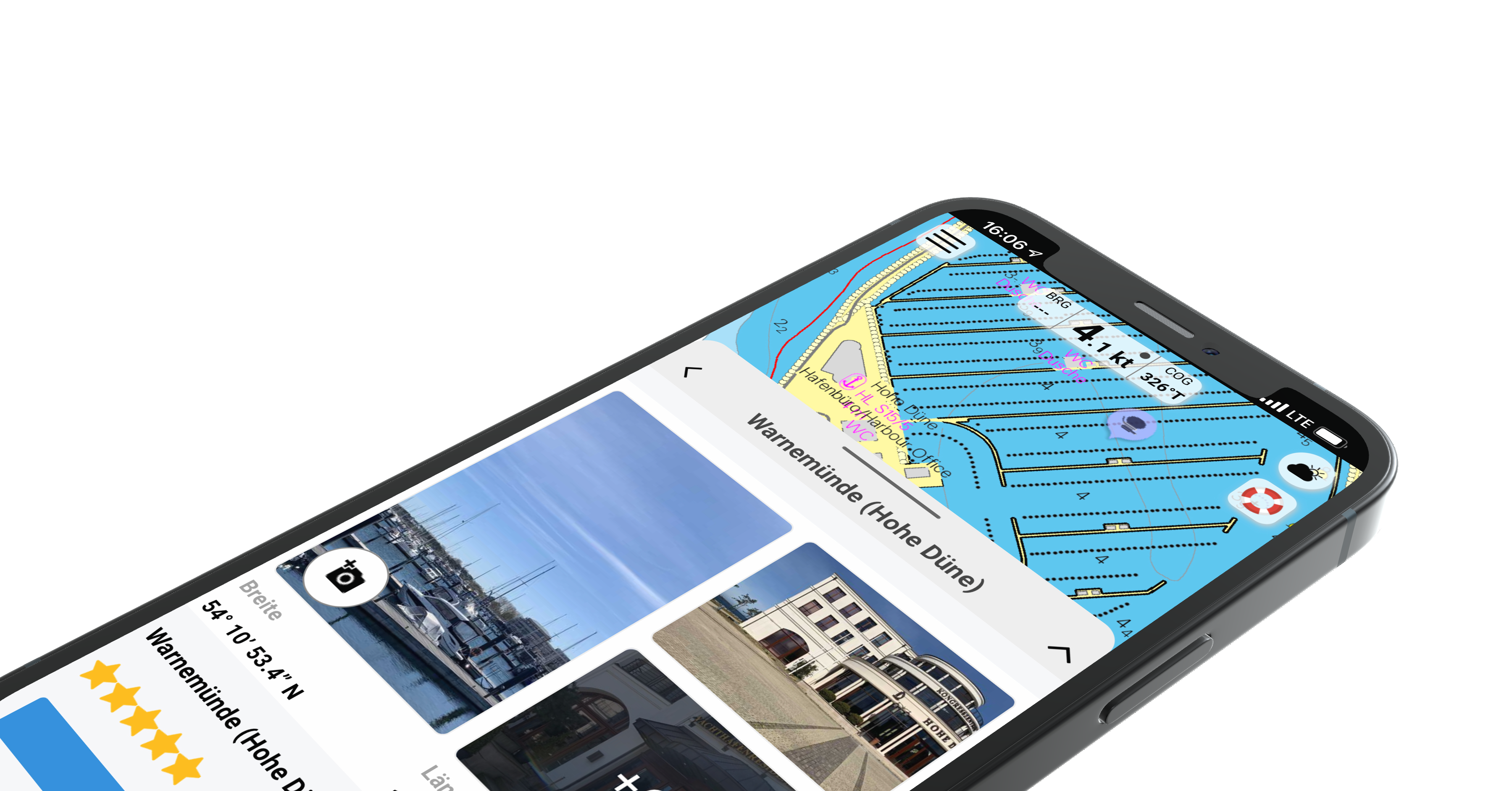 For the new 2021 season, we have once again provided a comprehensive update for the NV Charts App. With the new version, the NV Charts App now also offers augmented reality and satellite imagery as a navigation aid for even better insights and new, outstanding features for everyone on the water.

Satellite overlay for even more insights

With the satellite overlay, even the most remote regions can be explored from the above and an even more detailed impression of your anchorage provided. In regions with available vector maps, such as the North Sea and the western Baltic Sea, the contours from vector data are even merged directly with the image data. This creates an even more detailed representation of the situation on site.

Jeppe Scheidt, app developer and sailor, says about the app:
"Satellite imagery in the NV Charts App provides an ideal complement to a nautical chart display for anyone on the water - and the fusion with vector data provides a unique display that makes navigation much easier."
Augmented reality
Orientation is essential to navigate safely on the water. With the new version of the NV Charts App 2021, there is now the option on phones to use the device's camera to project data from the surrounding area directly into the camera image in real time. In this way, ports, anchorages, navigation warnings and points-of-interest (POI) information from the digital nautical charts as well as available AIS signals can be displayed in the augmented reality view (AR view). The function uses the NV Charts chart data available offline and calculates the direction and orientation based on the compass and GPS sensor of the devices and projects the information in the AR view in the NV Chart App.

One way to have great nautical charts both on paper and or the gps navigation on our phone or tablet is to use our popular combination pack of paper and digital nautical charts, which includes both charts in clever atlas format and digital nautical marine boating charts/maps for use in the NV Charts App, including a update service for the edition purchased. This is of course the safer option for your navigation solution. However, you can also purchase digital boating charts as a subscription directly in the NV Charts App. The subscription duration is one year and is automatically extended (unless cancelled). The advantage: your boating charts are always up to date in the NV Charts marine GPS navigation app.

If it is not yet clear where the journey is going to take you, free online charts can be displayed for all NV Charts nautical chart areas in the app, or in your browser.

The offer of the new vector charts is an absolute highlight of the sea charts for the Baltic Sea and German North Sea and the presentation with a sophisticated symbol library of outstanding quality. Especially nice is, that here again a lot of attention is paid to the good presentation of the charts and that also the identifiers of buoys and lighthouses are shown without extra clicks. Highlighted lighthouse sectors are also a quality feature, which clearly helps to easily understand even complex fairway situations, even in the digital nautical chart.

The latest information is essential for safe navigation on the water. With the new version of the NV Charts App 2021 you have the possibility to become part of the chart community. You can now add marinas, anchorages and navigation warnings to the digital chart and also add and share interesting places beyond navigation, such as restaurants or points of interest with pictures. Others can respond directly with comments. The continuously edited content can be downloaded directly to be available offline. In order to make all information easily accessible, we have improved the search function: You can explore the surroundings and search directly for place names as well as anchorages, harbours, ramps, waypoints, cranes, petrol stations, or tide stations. In addition, an auto-routing function has been integrated, which allows you to navigate directly to your destination using the NV Charts App as a marine GPS Plotter.

Jeppe Scheidt, app developer and sailor says about the app:
"With the NV Charts app we all have the opportunity to share our experiences on the water and together make the sailing and water sports experience even more exciting".

Together navigation on board is even more fun! You can now share your tracks with friends or use the data outside the app and export it as GPX file. You can share your favorite harbors and anchorages from the app simply by clicking on a link and coordinate your trip planning even better with everyone.

With the AIS function in the NV Charts App you can keep an eye on AIS signals in real-time. You can connect a Wlan AIS receiver to the NV Charts App the app displays AIS Class A and B signals and navigation aids (ATON), as well as MOB AIS SART transponder distress transmitters, directly in the digital chart in real-time. This allows for a better understanding and assessment of the traffic situation. To activate the AIS function in the app, only the access data for the AIS router must be entered under Settings (IP and Port). The NV Charts App works with many AIS receivers and was tested with the following devices:
Tested AIS devices for NV Charts App:

But this is a standard format and really any AIS receiver sending NMEA 0183 over Wifi TCP-IP (which most do, and this can usually be easily configured) should be compatible.